Pest Control Information for the Dallas-Fort Worth Metro 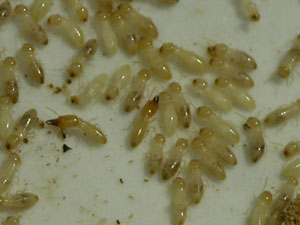 Termites eat wood and can cause great structural damage to your home. A typical homeowner's insurance policy does not cover destruction caused by termites, even though they cause over 1 billion dollars in damage to homes throughout the United States each year.

Is it a Termite or an Ant?

We thoroughly inspect your home or business, looking for the signs of termite infestation. Some of the things we look for are: 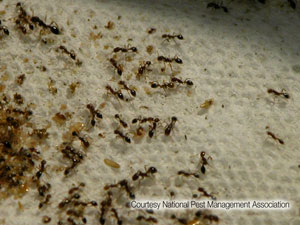 There are many different kinds of ants in the DFW area. Some cause property damage, some are a nuisance pest, and some of them bite. Some of the most common are:

Carpenter ants get their name because they excavate wood in order to build their nests. This results in smooth tunnels inside the wood. Carpenter ants range in size from one-quarter inch for a worker ant to up to three-quarters inch for a queen. These ants mainly attack wood that is or has been wet and damaged. Even though these ants first invade wet, decayed wood, they may soon begin building paths through dry, undamaged wood. They enter structures through cracks around doors, windows, or through holes for wires or plumbing. They can also crawl along overhead wires, shrubs, or tree limbs that touch the structure. Carpenter ants are considered a wood-destroying insect.

Fire ants nest in the soil and build mound nests in landscape areas or near a structural foundation. This ant gains entry to a structure through holes or cracks. The sting of a fire ant is painful and often results in a raised welt that becomes a white pustule.

The odorous house ant gets its name from the strong, rotten coconut-like smell that it gives off when crushed. 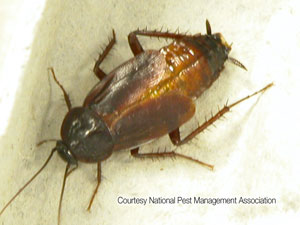 The most common roaches are the German roach and the American roach.

German cockroaches can be found throughout a structure, but have a preference for warm and humid places. They are usually found in the kitchen and secondarily in bathrooms, but they can occur in rooms where people eat and drink. They spend 75% of their time in cracks and crevices near food and water sources, hence their affinity for residential and commercial kitchen environments.

This roach is the largest of the house-infesting cockroaches. They can be found in sewers, around pipes and drains, and around the exterior of structures. American roaches are abundant in landscapes when there are ground covers, wooden decks, sprinkler systems, and exterior lighting.

Cockroaches have been reported to spread at least 33 kinds of bacteria, six kinds of parasitic worms, and at least seven other kinds of human pathogens. They pick up germs on the spines of their legs and bodies as they crawl through decaying matter or sewage and then carry these into food or onto food surfaces. Medical studies have shown that cockroach allergens cause allergic reactions, especially in children.

The house mouse is the most common rodent pest in most parts of the world. Mice can squeeze through spaces as small as a nickel. A female house mouse can give birth to up to a dozen babies every three weeks. Other interesting facts about the house mouse:

These are the guys with the long tails. They range in size from 6 to 8 inches in length, not including their tails. Rats can gain entry to a home through a hole the size of a quarter. They are excellent climbers, can chew through wiring causing fires, and will eat just about anything, including decaying material. They live in fields, woodpiles, under decks, and in structures. Interesting facts: 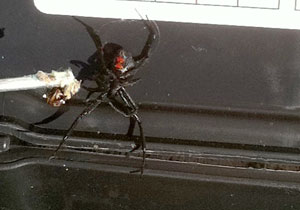 According to Texas A&M University, there are nearly 1000 different species of spiders located throughout the State of Texas. There are two venomous spiders, the black widow and the brown recluse. Spiders, other than the two listed above, are not harmful to humans. Since spiders feed on insects, measures that eliminate unwanted insects will also reduce spider populations. Interesting facts about spiders: